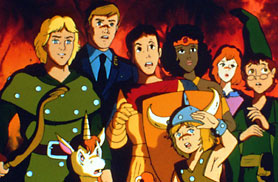 As a homage to the Dungeons & Dragons Cartoon (covered in Adventure 3) I’ve created what I consider the specific magical properties of the kid’s weapons. Please feel free to comment on them and let me know if I’ve missed anything. 😉

The Bow of True Aim appears as a fine yew bow with no , though the bow is bent properly as if it had the tension of an actual stringed bow.. The ‘string’ appears as a magical string of energy whenever a drawing motion is made by the wielder.

The appearance of the Shield of Invincible Steadfastness is of an ordinary metal heater shield of gold hue, with a black roundel on the surface and an eagle’s head argent within.

Club of the Giantkin
+3 Club

The Club of the Giantkin appears as a simple wooden club of heavy oak, though lighter and could even be wielded by a young boy or girl.

Special Abilities
* The user of this club has increased damage inflicted upon a successful attack, as if the weapon was wielded by a giant according to the following table:

* May inflict damage as a Earthquake spell (Companion rules, 7th level Cleric spell pg 13) once per day whenever the ground is struck, causing a small earthquake. This Earthquake is of ½ the effect of the spell, as if cast by a 17th level cleric.

This chapeau appears as an innocuous green wizard hat, of conical (pointed) shape.

Special Abilities
* May summon items as noted in the table below, once per day per level of the caster if the conjurer takes one round to concentrate.

* At 4th level the wielder may invoke any item on the table above without needing to roll the item randomly. The wearer may also summon any creature below 8 HD they wish upon a successful saving throw versus magic. Note that the item or animal will exist only 1 turn per level of the wielder and any creatures invoke might not be friendly to the wielder. Also, only one item or creature may be in existence at any given time.

* At 6th level, may be used to invoke the effects of any Magic User attack spell (DM’s discretion) upon a target once per day per level of the caster over 6th. The spell will have the same effect as if cast by an 11th level Magic User.

This staff appears as a finely carved quarterstaff of heavy oak, but is very light when carried.

Special Abilities
* The staff gives the wielder the ability to perform any acrobatic maneuvers successfully on a successful percentile roll of 75% + their Dexterity attribute or less; with appropriate modifiers as deemed appropriate by the DM.

* Can be telescoped magically into itself to create a small rod of 6 inches length or extend up to 10 feet in length.
* Can be used as a brace or lever, granting the wielder a Strength equal to a Hill Giant.

Cloak of the Chameleon

The appearance of this cloak is of gray wool, with a hood and clasp at the front.

* Grants +25% to all Hide in Shadows or Move Silently rolls if worn by a Thief.
* Bestows upon the wearer a +3 to saving throws versus Breath Weapon, Magic, and Wands.
* When the hood is raised to cover the head, the cloak becomes a Cloak of Invisibility, as if the 2nd level Magic User spell was cast upon the wearer. This does not muffle sound save for the addition to Thief skills noted above.