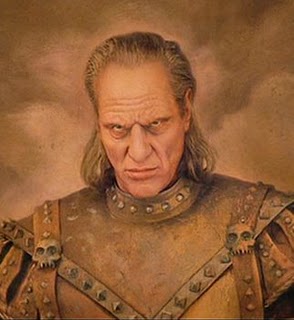 You can tell this guy is a badass by the skulls on his lapels. And the huge nose.

Let’s be honest:  One of the coolest things I get to do as a DM is come up with interesting villains to pit against my players, and I savor every moment of heart-pounding tension that leads up to the final, climactic battle, when the players finally come face to face with the nefarious enemy.

Of course, as much fun as developing a villain can be, it can also be very challenging.  As a storyteller, you want your villain to stand out from all the rest.  You want to create a character that wows the players and keeps them on the edge of their seats, and you want someone who poses a very real threat.  There’s a very fine line between this: 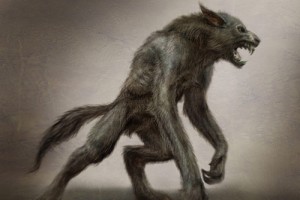 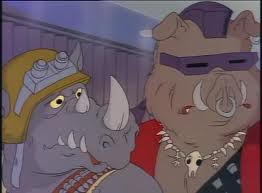 Here are some suggestions you can try to help build better villains:

Start by Building a Hero

“We are all born heroes; it is the world that makes of us villains.”

This might sound like strange advice, but one of the best ways to develop a villain is by starting off with a hero, and working your way forward through their life until you stumble upon the moment (or moments) that turned them against society.  This works even if your campaign setting is the black & white, good vs. evil variety — just look at Anakin Skywalker/Darth Vader, as an example — but it works especially well when the lines between good and evil are murky at best.

Start by finding good causes that would inspire your hero to action, even in the face of insurmountable odds.  As an example, we’ll use Vlad the Impaler.  Vlad may have been one of the most gruesome men in history, but he gave land to the poor and was a staunch supporter of his people and their rights.  Even to this day, Romanians praise Vlad Dracul as a hero, and not the villain the rest of the world portrays him as. 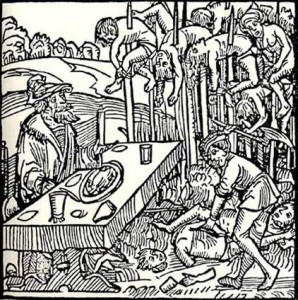 So let’s imagine Vlad the Impaler is a hero…he’s a man who cares deeply for his people, whose stubborn patriotism — and arrogance — fuels his campaign to claim the throne of Wallachia, then turn against the Sultan Mehmed II in blatant defiance.

Once you’ve developed the concept of your “hero”, it’s time to sprinkle in “flaws” — attributes of the character that cause them to act a certain way — usually with disregard for the livelihood of others.  You’re welcome to use as many or as few flaws as you feel is best for the character concept you’re developing, but I definitely recommend reviewing the character’s moral and ethical compass, and adjusting accordingly.  Vlad doesn’t order 20,000 people be impaled because his ethical compass is accurate; chances are the needle’s a bit off kilter.  The good thing about this step is that it forces you to think about where the character went wrong and why, adding depth to the character’s background.

Finally, look over your character, and take every part of their personality and background into consideration as you determine what their place in your adventure or campaign might be.  You know what motivates them — love, wealth, power, etc. — and you also know why they will stop at nothing to have what they desire most.  You’ve analyzed and gaged their individual moral and ethical compass, and you understand where they failed and how they became a villain.

Ultimately, it’s Vlad’s ego that proves to be his undoing.

Another Suggestion:  A Villain with a Twist

While we’re on the subject of starting with heroes, why not try this out and finish with a hero as well?

The party is on a quest to reclaim a particular magic item.  They have no choice, for whatever reason, and must complete this quest.

Unfortunately for them, this magic item is guarded by a Holy Order o f Paladins.  Yep, the good guys.  Now the players must choose to either violate their own moral compass and battle the Paladins, or give up on their quest — as they will be unable to simply persuade the paladins to part with the artifact they are protecting.

Finally, I present to you five of the top villains from film and television that every writer should be familiar with: 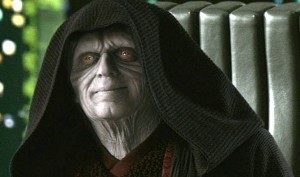 Emperor Palpatine, from "Revenge of the Sith"

Why he’s awesome: I usually don’t go for the cut-and-dry “good vs. evil” types that are rampant throughout Star Wars, but the Emperor is a very devious character whose schemes and motivations come to fruition after decades of planning.  He’s always ten steps ahead of any other characters in the story, making him a formidable opponent, but his most intimidating aspect is his power to manipulate, suggest, and influence others, tricking them into doing his bidding.  This is showcased best in the 3rd film, “Revenge of the Sith”, when Palpatine is explaining to Anakin that maybe the darkside isn’t so bad after all… 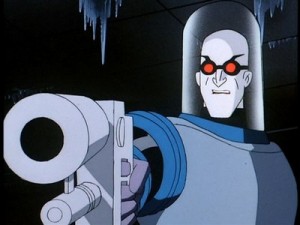 No. 2):  Mr. Freeze, from the Animated Batman series

Why he’s awesome: He might be cuckoo for ice crystals, but Mr. Freeze does everything — and I mean EVERYTHING, from bank robberies to grand larceny to kidnapping — all in an attempt to find a way to save his wife, whom he has cryogenically frozen.  Eternally separated from the love of his life, Mr. Freeze will let nothing get in the way, and will do everything in his power to make sure no harm ever befalls her. 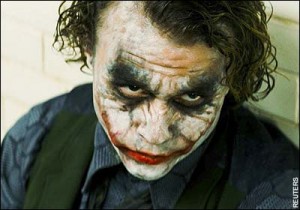 The Joker, "The Dark Knight"

Why he’s awesome:  This movie does a fantastic job of introducing the character of the Joker with no back story to speak of, and Heath’s performance is so spot on you don’t even question the fact they never explain where the Joker came from.  He simply…exists…in much the same way the forces of chaos and entropy exist. 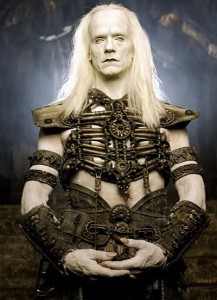 Jeremy Irons as the "Über-Morlock"

Why he’s awesome: The Über-Morlock is a powerful creature whose psychic abilities allow it to keep the other morlocks in check, prohibiting them from consuming their food supply.  The interesting thing about this is that the Über-Morlock understands its place in the grand scheme of the food chain and, despite having total access to the time machine and thus an ability to go back in time and rule the world and change the entire course of history, he instead returns the time machine back to the time traveller, which is something we don’t typically see in Hollywood.  Plus, he dresses like a total badass. 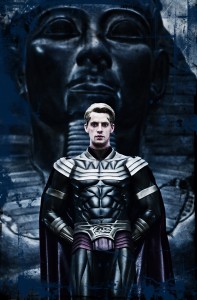 Why he’s awesome: Ozymandias is a hero motivated entirely by the notion that the needs of the many outweigh the needs of the few.  Fearing that the world is progressing rapidly towards its own destruction in a nuclear holocaust, Ozymandias goes to incredible lengths to unite the world, in the hopes that doing so will prevent nuclear war.  And by “incredible lengths”, I’m referring to killing a former superhero ally, infecting anyone who ever came in contact with Dr. Manhattan with cancer, and creating a false “threat” against the world that forces all of humanity to unite together.

The Secret DM is an avid role player who prefers to keep his gaming lifestyle low-key — by hiding it from friends, family, loved ones, co-workers, neighbors, strangers, teachers, the mail man, any and all of their pets, and most of society. Gamers excluded.