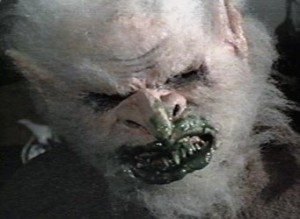 Strange monsters, mysterious mages, fighters that take a licking and keep on ticking, holy men who bring the word of god and his power to the masses; these are the cornerstones of Dungeons and Dragons.  But for today let’s focus on monsters, the foul denizens of the underworld that make up the meat of any great adventure.

I used to think monsters were just there for you to fight;  Sure, I understood that a dungeon needs an understandable and realistic ecology – you don’t put wood golems in a magma cave, and you don’t mix drow with duergar – but it didn’t go much further than that.  Monsters were just there, maybe because it was their home lair, or maybe they had moved into the area through happenstance.  Usually, they were there because they had the right amount of hit dice to challenge the party and it would logically make sense for them to be there, but I never bothered with how they were made, or where they came from.  I would never pay very much attention to what gods they prayed to or what their childrearing was like.  It was never important to me.  If I ever needed info on that I would just check the ‘Ecology of ____’ articles in Dragon and roll with it.  A couple of weeks ago I read a post on Dragonsfoot by a user named Beedo that completely changed how I look at monsters:

“The problem folks have (not you guys) is that humanoids became just men in funny suits.  It’s the thing I hate about B2 – Keep on the Borderlands – you have all those humanoid tribes with females and males and little humanoid kids.  […]  Naturalism defeats horror.  It’d be much better if creatures like bugbears were spawned by horrible pumpkin pods or created by the goblin king out of pure magic, or something completely unrealistic.  Then DMs would think of using them as monsters (the Boogeyman, the Bugbear of legend) […] instead of, you know, just being the monsters that show up on level 3 because they’re slightly tougher than hobgoblins.”

Since then the way I look at monsters and how they fit into my campaign world has evolved into a more in depth process.  Instead of just placing monsters for PCs to fight I’ve started taking an active look into the creatures’ roots in mythology (if they have any) or how they might be viewed through the perceived mythology of the campaign world.  That’s not to say that I crib from myths whole cloth, but rather I used them to inspire my own world myths.  A good example of this is the goblin: there are many myths and folktales about goblins, and because of that there are many dissociated depictions of goblins.  In order to save myself some trouble (and headaches) I’ve gone ahead and come up with a wholly new mythology for the goblins of my campaign world;  one that is actually inspired by Beedo’s post.

Goblins in my world are physically the same as those from the Pathfinder RPG, they’re different enough from other games and editions that their aesthetic sticks out to me and is interesting compared to things I’ve seen previously.  They’re loveable melon-headed creatures with glowing red eyes, grey-green skin and bulbous heads.  One might think of a misshapen, under-ripe pumpkin to get the color and shape right.  “Why do these creatures look like this?  Where do they come from?” the people of old would ask.  Well, one would assume that, with their pumpkin like appearance, they come from pumpkin patches.  Troublesome crops that refuse to grow, whether due to infertile soil or the taint of some ancient evil, are the spawning grounds for the goblin hordes.  So, it has become custom in my campaign world to destroy unripe pumpkins that grow too large for fear of being overrun by the foul creatures.  Whether this is true or not is unknown to the people of this world (it is), but that’s unimportant to me, what matters is there’s now a consistent legend in the campaign milieu that informs both the players and I of the world and how it works.

It’s a bit of an extra step, but I feel it adds a whole new layer of detail and a breath of life to the game. It helps the monsters to seem monstrous instead of being “men in funny suits.”  Next time you’re preparing for a game, and you have a monster you don’t really have a niche for, try it out and see what comes of it! And, of course, tell us how you’d do it or what you did!

Next time I plan to tackle the combat system, hit points and variable weapon damage. Should be fun and full of game mechanics jargon!