Adventuring Beyond (and Beneath) the Sea 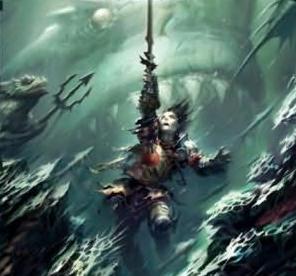 This week the Save or Die Podcast crew set out to sea – and I was immediately reminded of “The Sea People” – a sourcebook for Basic Dungeons & Dragons.  Written by Jim Bambra (Night’s Dark Terror, Shadows over Bogenhafen) and published as part of the “Creature Crucible” series by TSR in 1990, “The Sea People” took D&D campaigns under the waves, expanding on the marine-based rules presented in the Expert boxed set, and introducing new non-human classes, such as aquatic elves, kopru, and shark-kin. Whether you’re setting out on a voyage across the ocean, or looking to explore the uncharted depths that lie beneath the surface of the Sunlit Sea, “The Sea People” is an excellent sourcebook (available for purchase here) which features a richly detailed history of Undersea and its inhabitants, new character creation options (tables to randomly determine physical traits, two tables representing possible perks and flaws to both enhance and hinder your character, as well as rules to turn any character into an aquatic spellcaster), new magic items and spells, and a plethora of adventure ideas.  In addition, you’ll find a set of optional rules that will take your sea-faring, underwater-exploring adventures to the next level.  Condensed into four pages, these optional rules address many of the challenges wrought by the ocean depths.  Indeed, surface dwellers would do well to avoid the harsh environment that lay beneath the waves… 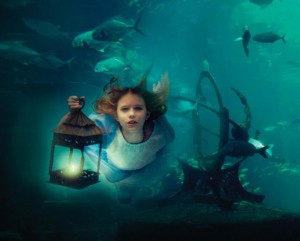 The first thing players and DMs have to worry about is just how far they can see underwater.  “The Sea People” presents the following chart: It’s important to keep in mind that spells such as light do not work as well underwater, only functioning at half their normal power.

One of the deadliest environmental conditions (outside of drowning, of course) is pressure which, at too great a depth, can cause eardrums to burst or lead to “nitrogen narcosis”, which is a building up of nitrogen in the bloodstream that causes the diver to slip into a stupor-like state.

“The Sea People” suggests that, when outside of a vessel and either ascending or descending, a diver must rest for one turn for every 10 minutes used to move either towards the surface or slip further away from it.  Adventurers unable or unwilling to to take this rest suffer 1d8 points of damage each turn.

Generally, movement rates are one-half normal in underwater encounters.  However, this actually only applies when ascending or descending.  Characters walking along the ocean floor move at their normal speed. Any character who isn’t familiar with the nuances of fighting underwater suffers a -4 to hit penalty.  This penalty can be removed, at the rate of 1 point per month, following a successful intelligence check which takes place at the end of each month.

Cutting weapons (like swords and axes, for example) and bludgeoning weapons (maces, hammers, etc.) suffer severely underwater – anyone using these types of weapons to attack suffers a -10 penalty to their roll.  Thrusting weapons, like spears and daggers, work well underwater, and so their use imposes no penalty.

What I’ve outlined above represents many of the ideas presented in “The Sea People”, although there remains still plenty more to read about, both in that sourcebook and elsewhere.

And if you’re very interested in running an under-water adventure, I suggest you read Mel Odom’s “Threat from the Sea” – a Forgotten Realms trilogy – in which the ocean depths play a key role to the storyline.

What ideas do you have for underwater adventuring?  What experiences have you had as a player in exploring the Undersea?