Adding Suspense and Horror to Your Fantasy Campaign 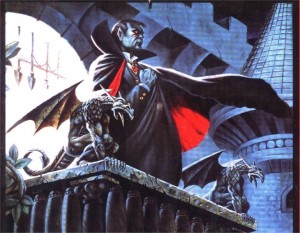 Halloween may have come and gone, but there’s still time to spice up your adventures with some gothic horror elements.  In Save or Die’s last podcast (Adventure #10), DM Vince mentioned he’s been working on adapting the Ravenloft Campaign Setting to his personal D&D game.  This poses some unique challenges, because classic D&D is built more for dungeon crawls than easing the lament of some ancient, love-scorned vampire lord.

That isn’t to say that Classic Dungeons & Dragons is lacking in richly detailed content; one need look no further than Dave Arneson’s Blackmoor setting, or even the Gazeteer series.  Both present volumes of material that enhance their respective settings and add layers of complexity and realism to the game.  Unlike these settings, however, games systems like Ravenloft explore intense themes of terror and fear, drawing characters into nightmarish landscapes from which the only escape may very well be death…and even that is no guarantee.

Challenges to Incorporating Horror in Your Game

As a setting, Ravenloft imposes very serious restrictions on clerics.  Their turning ability is greatly reduced, a number of spells are adversely affected, and they are, for the most part, separated from whatever divine power they worship.  This could impact game play as well as character development.  Paladins suffer negative effects also.  The Domains of Dread do not take kindly to these interlopers, and offer no perks in exchange for these limitations.

Making clerics weaker invariably makes the game that much harder, especially when dealing with a set of rules that favors untimely deaths of characters because of poor dice rolls.

Ravenloft is also very human-centric – even more so than the Basic D&D Known World.  Demihumans are not only rare in this setting – but they are feared and mistrusted by the natives, making any social interactions difficult at best and hostile at worst.

These changes in flavor, among others, can drastically impact the fun of the game and ruin the experience for everyone involved.  DM’s have to be careful when incorporating horror not to alienate their players or make certain character choices unattractive.

One of the best ways to handle these character restrictions is to simply ignore them.  It may be more realistic for the cleric to not have access to its spells, but stifling the character means you possess little regard for the other players.

Ultimately, horror is about fear and suspense.  It has to do with the thrill of facing the unknown, and the uncertainty of what remains just out sight – whether that means something hidden in the shadows, or some ancient and awful mystery concealed in tomes of dark power.  It has very little to do with restrictions on character types.

Those restrictions may still come into play – but rather than being a constant element, you can make them one shot incidents – the cleric’s turning ability fails suddenly in the face of an undead creature that he or she should have no problem warding off – causing the player to doubt just what kind of undead monster this is and their ability to defeat it.

Here are some more thoughts on horror, which can be applied universally – whether you are looking to incorporate elements like the Ravenloft setting into your game or not:

There’s certainly a lot more that could be said on the subject, but this is a good starting point to begin incorporating horror into your own games.

What ideas do you have about horror in D&D?  What methods have you used?

The Secret DM™ is just an average guy, trying to navigate the complexities of a successful career, a happy marriage, and raising a daughter…all while secretly rescuing damsels from fire-breathing dragons.  Visit him at www.thesecretdm.com or find him on facebook (http://www.facebook.com/secretdm), or contact him at: thesecretdm@gmail.com.  Happy Adventuring!