My last article talked about the merits of Basic Dungeons & Dragons’ “Single Class/Single Race” design, and how this captures the essence of Tolkien’s Fellowship from the Lord of the Rings Trilogy – by emphasizing the characters themselves without dependence on race/class combinations.

Having a party that consists of a fighter, a magic-user, a dwarf, and a halfling is all well and good if you’re looking to recreate the archetypes of traditional fantasy, but you might be ready to try something new.  Thankfully, because of its simplified structure, Basic Dungeons & Dragons is easy to customize.

Here are three ways to break from tradition:

A minor tweak to the core classes expands the number of choices available to players.  For example, you can create a version of fighters featuring a +1 bonus to strength, but scale back the type of armor they can wear to either chain mail or leather.  You might try generating a magic user with more than 4 hit points, possibly with a 1d6 hit die, and the ability to wield a long sword in battle, but make the caster level that of a magic user two levels lower.  In other words, this variant character cannot cast a spell until reaching 3rd level.

(Make certain if you’re providing a bonus, such as a +1 to strength, you’re also taking something away.  This process keeps characters balanced.)

Here is a more detailed example:

Stalker – based on the Thief class

This creates a new special ability table, which looks like this:

You might feel that a 1st level thief moving silently half the time is too powerful, but keep in mind that the thief’s greatest strength – the ability to backstab an opponent and deal twice the damage – has been removed, so you’re going to want your character to be hiding (and as quiet as possible) whenever a fight breaks out.

Does this make the character too weak?  A 1st level stalker can track enemies as well as a thief can pick pockets, and that could be a very handy talent to have, depending on the campaign.  I created the stalker solely for this article, but I envision the class as a bounty-hunter type: someone trained to find criminals and bring them back – alive.  For that reason, abilities like removing traps and backstabbing didn’t make a lot of sense.

If I were to flesh the class out further, I would introduce the Hear Noise ability at a higher level, and other special abilities as well – like translating the rules for subduing dragons (from the Mentzer Basic Dungeon Master’s Book) into a class ability that could be used against any opponent. 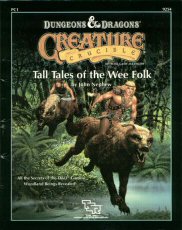 Tall Tales of the Wee Folk, by John Nephew © 1989 TSR/WotC. All Rights Reserved.

The “Creature Crucible” series of supplements introduced treants, harpies, sea giants, and lycanthropes as playable classes, utilizing a “negative experience” mechanic to balance extraordinary abilities against the standard classes (as an example, treants begin play -48,000 XP below 1st level).  Adapting this approach to character design is easier than it sounds, although I recommend keeping things simple – modify existing experience tables, rather than writing up brand new ones.

First, define your class and list the abilities it possesses, then decide how those abilities work:

Enlarge is a powerful ability, so I’m going to require the duergar reach 4th level before gaining this talent.  I’m also going to modify the dwarven experience table by changing 3rd level to 1st level, which will make the actual dwarven 1st and 2nd levels into negative levels, like so:

This means that a 3rd level duergar is the equivalent of a 4th level dwarf, and will gain its powerful enlarge ability around the same time that a standard dwarf would be approaching 5th level.

One other ruling I want to make in regards to this character is that the duergar will not gain new hit point rolls for the negative levels; for the purposes of the duergar at least, hit dice are only rolled when advancing above 1st level.

In his article “Building the Perfect Class”, game designer Erin Smale (http://www.welshpiper.com) analyzes the whole level advancement structure of Basic Dungeons & Dragons, reverse engineering the classes into smaller components.  Want a thief that rolls d12 for hit points?  That’s an additional 400 experience points.  How about a dwarven cleric?  No problem.  This system generates any conceivable character, from monastic warriors to hobgoblin shamans, and ensures each new class is balanced with the traditional class options.

No matter what method you use, the most important thing is to have fun — after all, that’s what role playing is all about.

How do you approach class design?  What methods or resources have you used to create new classes for Basic D&D?  Share some of your successes – and failures – with us, and you might be featured in a future article!

The Secret DM™ is just an average guy, trying to navigate the complexities of a successful career, a happy marriage, and raising a daughter…all while secretly rescuing damsels from fire-breathing dragons.  Visit him at www.thesecretdm.com or find him on facebook (http://www.facebook.com/secretdm), or contact him at: thesecretdm@gmail.com.  Happy Adventuring!