Getting Back to Basics with The Secret DM™

“In Search of Adventure: My First Roleplaying Experience”

When DM Vince invited me to contribute articles to www.saveordie.info, I wasn’t really certain what I wanted to write about.  Classic gaming definitely interests me – it always has – but I didn’t believe I had enough to say on the subject.  After all, I stopped playing 2nd Edition AD&D somewhere around 1998.  It was almost ten years before I picked up another D&D book, and by then, D&D was at the tail end of 3.5, with 4th Edition just around the corner.  Since then, I’ve played 4e exclusively…whenever there was time for it, anyway.

So what do I know about “classic” gaming?

I started roleplaying when I was 8.  I had overheard my brother telling our Mom about the game, and trying to overcome her objections.  Which, come to think of it, should’ve been impossible, because her objections dealt with Satanism, the occult, and kids attempting suicide: all pretty heavy topics for a 12 year old to not only be discussing, but debating against.

So I have absolutely NO IDEA how I finagled my way into going along, once my brother got the ‘Okay’ from Mom.  Maybe my Mom was too tired to fight anymore.  Maybe she believed my brother that it had nothing to do with any of that “occult” nonsense.  Or maybe – and this I’m almost convinced of – my Mom knew just how much my brother didn’t want me to tag along, so she let me go as a way of spoiling my brother’s fun.

Regardless of the “how”, all that mattered is that I WAS playing D&D – and that’s where I met the man who changed my life forever: The Dungeon Master.

To anyone else who had gathered there that day, the Dungeon Master was just an ordinary-seeming kid, some years older than my brother and his friends, who had a pleasant demeanor and was thrilled and excited to have a party to run adventures with.  But to an 8 year old, he was a towering monstrosity of power and intimidation – he was the crafter of worlds, shaper of destinies, and all-around bad ass.  I was scared.

Still, the Dungeon Master had a compassionate side, and – although he hadn’t known I was going to be coming along – he took the time to walk me through the steps of making a character.  He suggested a fighter, which he felt would be the easiest character type to learn with, and showed me how to roll the dice, record the numbers, and even explained what it all meant.  Not that it mattered; he could’ve told me my sword was a banana and 2+2 is chicken, and I would’ve believed him.  I wasn’t about to question the DM; he was scary – absolutely nothing like the diminutive bald guy in the cartoon – and I didn’t want to be sent home before I even had a chance to play.

“You’ll need to pick a name for your character,” he said, “It can be anything.”

He looked at me, somewhat stunned, because the name I had chosen wasn’t Bob or Killgore or Tiny or anything like that.  It wasn’t anything at all.  And that was a good thing.  Especially for an 8 year old.  It sounded like a fighter’s name.  It sounded like something right out of a book.

“It’s from my favorite book.” 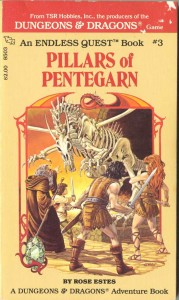 The book was “The Pillars of Pentegarn”, by Rose Estes, from the Dungeons & Dragons choose-your-own-adventure style of Endless Quest books.  I must’ve read it like 50 times.  I’m not sure “reading” is the right word when you could potentially get through it in only 12 page turns, but it was a great story, and I related to the character of Baltek.  Well, I didn’t really relate, but I knew my fighter character would.

Yep.  Three fighters and a cleric.  Hey!  The DM had told us the fighter was a good class for starting players, and, frankly, we were all just starting out.  Vagna too probably should’ve been a fighter, but the three of us were going to get hurt…a lot…and the DM suggested we would need healing.

The DM rounded out the party with two NPC’s – Deveril the thief, and Crassus the magic-user.

Once everyone was ready, we sat down to our 1st adventure, and never looked back.

Does any of this mean I’m qualified to write about classic gaming?  Probably not.  But one thing I can say about my personal experience with classic Dungeons & Dragons is this:  Through all the years, I have continued to pull out my copy of the red box basic rules, thumb through the Player’s Handbook, and even run myself on the included solo adventure time and time again.  I’ve read and reread about that first meeting with Aleena, the proceeding encounter with the ghouls, and that fateful conclusion when we came face to face with Bargle.  I’ve reviewed the ideas presented in the Dungeon Master’s Rulebook under the “Creating dungeons” heading, and even used some of the suggestions there to develop adventures and campaigns whenever I needed just a little nudge of creativity – even as recently as my 4th edition campaign.

Maybe I do have something to say on the subject after all.

I’m curious to know, though:  What were your first experiences with Basic D&D?  How did the game shape your view of roleplaying?  What are some of your fondest memories of Classic D&D?

The Secret DM™ is just an average guy, trying to navigate the complexities of a successful career, a happy marriage, and raising a daughter…all while secretly rescuing damsels from fire-breathing dragons.  Visit him at: www.thesecretdm.com or www.facebook.com/secretdm, or contact him at: thesecretdm@gmail.com.  Happy Adventuring!