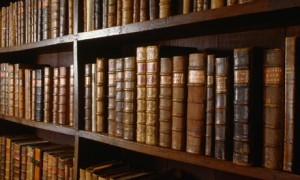 There are times when the harried Dungeon Master needs to populate a Magic User’s library with some tomes that aren’t spell books. After all, there is certainly much theory involved with magic that go beyond a mere recitation of spells!

Below is given a table for random books that might be found in such a library. None are magical in and of themselves, but a DM might consider giving a Magic User or Elf with such books a bonus when researching spells or creating magic items; reflecting a greater understanding of the theory and practice of dweomercraft.

Roll 1D10 and such are the number of books in the library. Then roll on the chart below:

Title/Author
1. Predatory Plants by Robilar the Garden Master
2. Tactics of the Unification Wars by Matronius
3. Flotation by Device by Tenser the Mighty
4. Hands of Fate by Bigby the Grand Incanter
5. Tantric for Dummies by Murgen of Haven
6. Prayers of the profound by a Humble Brother
7. Zoology Arcanix: A Study of the Unnatural by the Hierophant Golden
8. The Banished and Corrupt: Orcine tribes of the Northland by Ambrose Magellan
9. Circles, Pentacles, and the Protection of Self by Mordenkainen the Master
10. Heath Gnoll Legends by Abd La-Hazred
11. The Trigram and Associated Glyphs by Rah-sylon the Inestimable
112 Uses Of Elemental Ichor in Fire Spells by Cameron
13. The Brown Workbook of Archmage Zelimzam; edited by Dansayre
14. History of the Decayed Empire, Vol I: 307 to 433 F.C. (Unknown)
15. History of the Decayed Empire, Vol II: 430 to 710 F.C. (Unknown)
16. History of the Decayed Empire, Vol III: 717 to 802 F.C. (Unknown)
17. Maxander’s Libram by Ambrose Magellan
18. Account of An Expedition To The Sargos Ruins by An Apprentice
19. Glottal Stops in Command Words: Uses and Limitations by Rarye the Incanter
20. Towards An Understanding of Phantasms by Miasna the Mystic
21. The Oneirodaemonomicon of Broodhal The Younger; editor unknown
22. Ritual and Symbology of the Caledon Cults by Venton ap Wyngarde
23. The Skies and Stars Alight (book on Astrology) by Crucis Del Minarian
24. Confessions of Silver (Autobiography) by Silver Lord Argus
25. Historie of the Ende of the Imperium (Ancient History) by Tigelennius
26. Incantations Alpha (Theories of Incantation) by Maragon Kaitain
27. Vortexes & Thunderclaps (Weather) by Gustav von Meteorsburg
28. The Logic of Numerics by Gystiana Magna
29. Rainbow Sorcery: colors and Communion by Patriarch Manfred
30. Pantheons of the Northlands by Tigellinius
31. Caledon and its peoples by Anna Mach Neela
32. The Glyphs of Autumn by Sigved und Schwartzuberflek
33. The Underrealms vol I, Gnomes and their kin by Reynald of Forests deep
34. The Underrealms vol II: Goblins and Dwarves by Reynald of Forests deep
35. The Swords of Truth by Grandmaster Archilius
F36. ell Knaves and their Kin by Grandmaster Archilius
M37. acrodemonology by Canopus Major
M38. icrodemonology by Canopus Minor
C39. elestines and their Kin by Dominus Augusta Kylia XI
40. Aphroincantations and their uses by Murgen Kaitain
41. Oceans Deep and Mysteries beneath by Unknown
42. The Chimera and its ingredients: Uses and Discoveries by Edrick the Inquisitive (posthumous)
43. Codex Legii of the Basine Confederacy by Hermann von Skroder
44. Epistles Aqui by Matriarch Roweena
45. Analectorum de Profundia by Brother Tao
46. Martyrdom of Joels the Pious by unknown
47. Goblins and Goblinoids: facts and myths by Rallston of Haven
48. Libra de Malificum by Ralston of Haven
49. The Fish War by Hermann von Skroder
50. Legend of Tartanpion the Half-orc by Edwin of Silverdale
51. The Grand Herbalist’s Compendium by Avon rhagg Mynydd
52. Lost Magic of the Ancients by Murgen Kaitain
53. Biography of Tarajel de Ofalon “the Great” by Sage Dominick
54. Marcellus’ Diary / Years 1243-1247 F.C. by Agapitus Maximus
55. Legendorum of Tuntz by Valmere of Thundaria
56. Dragon Warlords’ Warfare Tactics : A Study by Hermann von Skroder
57. Epistle of the Fifth Archprelate by Abbess Consuela of Leeshire
58. Apology of the Shepherd of Tyrn by Unknown
59. Tragedy of Philius and Danaeda by Jonothan Bailswick
60. The Book of Darach’that by Rasillon Woldvank
61. The Sermon of the Lake of Fire by Brother Ingisson
62. Treatise on the Monastic Life by Brother Tao
63. Letter to the Tyrant of Kepherdown by Borodin Cetillius
64. Zaach’Nath Ool Fanecht by Avon rhagg Mynydd
65. Life of Gadaaldad the Impetuous by Edwin of Silverdale
66. Chronicle of the Temple of St. Julius by Khorath
67. Secrets of the Forge: The Famous Dwarven Blade and its Manufacture by Tosvig of Axehead
68. Chronicle of the Dukes of Ygthiri by Skald Xeno
69. Third Crusade of Aws Noir by Hermann von Skroder
70. Liber de Astoundis by Maragon of Khosia
71. The Song of Talonar by Borodin Centurrius
72. Apologia Against Those Who Deny the Power of Humility
73. History of the 2nd Mages Guild by Gurmen Kaitain
74. Brünshild Saga by Unknown
75. Concerning the Deeds of the by Halvard Adeptus Major Cursed One
76. Consolation of Goodness by Sister Marii
77. Secret Weapons of the Warcasters during the goblin wars by Gurmen Kaitain
78. Siege Techniques of Sulvar the Mighty : A Study unknown, edited by Hermann von Skroder
79. Rule of the Sacred Flower by Dessalidia Yanto
80. Homily on the Paralytic of Aquinas by A Sage
81. Treatise on Rulership: The Almighty and the Crown by Dominus Augustus Talonarius Magnificus
82. A Reply to the Heretics of Haven by Patriarch Embden
83. A Cyclopedia of Magical Gems by Rasillon
84. A Cyclopedia of Magical Stones by Maragon
85. A Cyclopedia of Magical Metals by Taranine the Delver
86. On the inscribing of Scrolls by Ignatius, Sage of Verdantia
87. Runic Conjurations by a Grand Incanter
88. The Familiar as an extention of Magery by Symonia al Zarinne
89. Magical Materials: The powerful and the profane by Maragon
90. Song of Ice Magic by Pioter of Shadowvale
91. Song of Fire Magic by Yanson Ironshod
92. Song of Earth Magic The Venerable Pow
93. Song of Wind Magic Roselyn of the hawkers
94. Beyond the Curtain: Necromancy and the Dead by Rallston of Haven
95. Blood and its Thaumaturgical Efficacy by Ree-shard of Orleans
96. The Journal of maragon of Khosia by Maragon of Khosia
97. Etiquette of the Infernal: Conversing with the Damned by Lord Robilar
98. Supplication to the Divine by Father Colin
99. Dispelling Magicks of Power by Rarey the Enchanter
100. Master of the Spell by Mordenkainen of Greyhawk

*** Thanks for inspiration to the D20 Netbook of Books, which can be found at:

Though the system given at the link above is really more for creating individual books, the detail given for said books is much greater than the above table.