Classes/Race: Fairies or the Fay 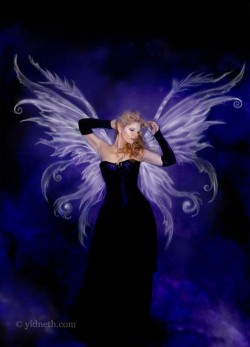 The Fairy, or Fay as some know them, are a strange woodland race akin to the Elves. They share many of the physical aspects of the Elves such as sharply elegant features, lithe forms and pointed ears, but their sizes range from 1-2 feet in height. They also have iridescent wings on their backs for flight and antennae emerging from their foreheads, with one above each eye. They are fair of complexion, though their hair and wings may be of any of the colors of the rainbow, and those Fairy with bright colors take inordinate pride in their appearance.

Fairy society is divided into two camps, the Seelie and Unseelie courts. These courts exist in pocket dimensions that have access to the Prime Material Plane but are not part of it. Fairies owing fealty to the Seelie court are mostly Lawful in alignment, while those choosing to be part of the Unseelie court are usually Chaotic. There are Neutral Fairies in each court, but they are few as the gnossis of the courts tend to draw most Fay to either Law or Chaos. A very small number of Fairy wander the Prime Material Plane, seeking new experiences and comrades in the world.

Restrictions:
* Cannot have a strength greater than 9
* Due to their small size, shields cannot be used by fairies
* Fairies cannot carry more than 800 gp in encumbrance allowance, though fairy sized gear will weigh 1/3rd its normal weight.
* Fairies must pay 2 times the listed cost for replacement gear (not at character generation) due to their small size requiring custom fittings.
• Can only attain the 10th level of experience.
• Fairy weapons do ½ damage as normally listed for weapons in the D&D rulebook (i.e. a sword 1d8 would do 1d4 damage, a dagger 1d4 would do 1d2 damage, etc.)
• Fairys cannot wear armor greater than chain mail.